An inspiring film about ageing creatively 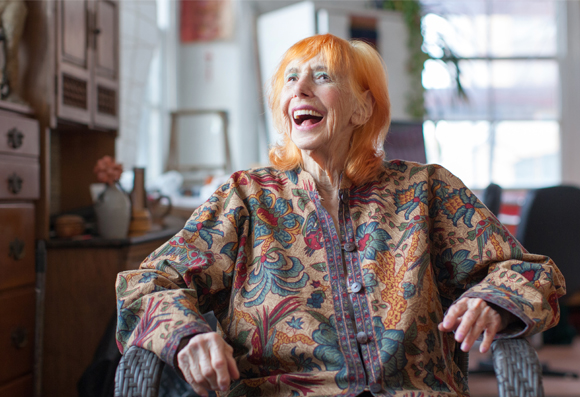 Melbourne-based filmmaker Rohan Spong’s latest documentary, Winter at Westbeth, is about a specific residency for older artists in New York City. We caught up with him briefly and chatted with him about the film and the importance of remaining creative and heard as we get older.

How did you discover Westbeth?

I first stumbled into Westbeth during a winter’s afternoon of art gallery hopping in New York with Mimi Stern-Wolfe in late 2011. Mimi and I had just made the film All The Way Through Evening together (about music composed by her friends and neighbours lost to HIV/AIDS, which she performed in an annual concert). We have a very Harold and Maude style relationship and I often spend time with her when in the city because we are serial gigglers and make each other roar with laughter. She insisted we go to Westbeth because her partner (poet Ilsa Gilbert) was exhibiting collages in the annual art show there, but also, it must be said, because the gallery space has a long warm bar heater that you could sit on to, as Mimi put it, “warm our tooshies”. I was keen to have my bottom warmed.

What was it that made you decide to use it as the subject of your next film?

Walking into Westbeth, it immediately struck me that the building was a world unto itself. It’s structurally a very dynamic place. It had previously been the Bell Laboratories, abandoned in 1966 and repurposed into 385 rent-controlled apartments under the guidance of architect Richard Meier. In 1970, people moved in and many of the original occupants still live there. The median age is somewhere in the mid-60s and the building has been dubbed a NORC, a Naturally Occurring Retirement Community, though few of the artists would describe themselves as retired!

What struck you most about the residents you met?

They are a dynamic and vivacious bunch, who continue to create and question and participate in the world around them. The people of Westbeth subvert many of the notions that we hold about the lives of older people. The film features many faces, but spotlights three characters: dance icon of Martha Graham/Alvin Ailey fame, Dudley Williams (75), poet/playwright Ilsa Gilbert (82) and dancer-turned-filmmaker Edith Stephen (95). Making art keeps each of them young at heart.

How important is it for older people to maintain their voice, presence, and energy?

It’s so important for older people to maintain their voices. This idea that we as a species will continue to make the same mistakes unless we take note of our history feels even more important, given the turbulent political landscape we find ourselves in.

Each of the artists featured in the film has participated in activism and conversation surrounding the visibility of LGBT people, the civil rights movement in America, feminism and so forth. My generation owes them a great deal, and I’m humbled that the film becomes something of a vehicle for that affirmation.

Overwhelming! It’s screened at Australian and international film festivals, and now it’s screening theatrically around Australia. The film is shot over one year in the life of Westbeth and people have been taken by the journey of the characters. There are moments of laugh-out-loud humour and tragedy in the film. The day-to-day lives of the characters are punctuated by poetry readings, dance performances, and some very psychedelic archive footage.

What was the most valuable thing you took away from this project?

The experience of making the film has taught me so many things. Each of the participants speaks to the idea that it’s important to make art, as it tells us something about the human experience. It communicates the intangible. It’s also important to record history and honour the people that fought for the various rights and liberties we take for granted today.

Winter at Westbeth will screen nationally on ABC TV this Sunday, 12 March at 10pm. Visit www.winteratwestbeth.com for more information.